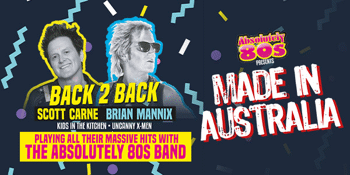 Beenleigh Tavern (Beenleigh, QLD)
Friday, 25 March 2022 8:00 pm
62 days away
18 Plus
Australian Artists
Rock
Send this event to
Absolutely 80s celebrates the crème de la crème of Oz rock with their ‘Made in Australia‘ tour. Without a doubt, the 80s was the most memorable and massive decade of music and this is the ultimate celebration of Aussie 80s mega hits!

Coming to you directly from the 80s, idols of the Oz music scene are touring with their band in one massive Down Under show!

It’s a high-octane two-hour show with Australia's biggest 80s hits, sung by the 80s stars who know how to hold the crowd in awe and whip up ‘em up into a dancing, singalong frenzy. The hottest 80s show in the country is the ABSOLUTELY 80S ‘MADE IN AUSTRALIA TOUR’.

Get your ticket to a damn good time today!