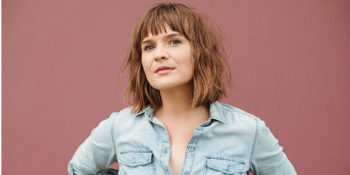 Exploring issues of gender equality and freedom of self expression, the album’s lead single “Something More” was hailed as a feminist anthem and, off the back of the song’s success, Sam was invited to tour alongside Kate Miller-Heidke, Paul Kelly, Tim Freedman and Ben Lee.

Revered for her soul baring, intimate performances, the new live show sees Sam perform DEAR JOHN in it’s entirety. Keeping organic sounds and storytelling at the core, with the bold addition of live looping and sampling.

“I’m using Ableton Push to sample sounds that we created in the studio, live loop my vocals and bring the album to life as a solo touring artist. There’s so much going on musically, but it’s the most emotionally raw I’ve ever been.”

DEAR JOHN was created after the dramatic ending of a toxic relationship.

"The breakup was what started me writing these songs but, in the end, the songs aren't really about the relationship at all. This album documents my process of healing, learning and rising up to become the woman I want to be. These are my stories and it's important to share them... because I know they're other people's stories too.”

Book early - these shows have been selling out!

“Buckingham wowed the crowd with her soaring vocals, silencing the room” - Stack Magazine