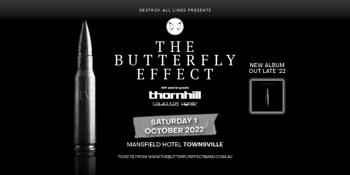 Special guests: Thornhill & Caligula’s Horse
Mansfield Hotel (Townsville, QLD)
Saturday, 1 October 2022 7:00 pm
93 days away
18 Plus
Rock
Send this event to
Symbolically and historically, the number four has come to signify things that are solid and whole; a fact entirely befitting of legendary Australian rockers The Butterfly Effect and the announcement today of their fourth studio album, aptly titled: IV. Following earlier snippets of new material via recent singles Nil By Mouth and So Tired, it’s entirely clear that time has only galvanized the original and reformed lineup of Ben Hall, Clint Boge, Glenn Esmond and Kurt Goedhart, aka The Butterfly Effect; and the confirmation of the new full-length IV, due out later this year, is also accompanied today with news that the band will also be hitting the road to celebrate the impending new album with a ten-date national tour alongside fellow Aussie heavies Thornhill and Caligula’s Horse.

With a run of 2022 performances already under their belts, including two headline shows and an appearance at Wallapalooza festival, The Butterfly Effect’s impending tour celebrating IV will kick off in Cairns at Tanks Art Centre on September 30, before continuing on to Townsville, Mackay, Toowoomba, Brisbane, Sydney, Hobart, Melbourne, Adelaide and closing out in Fremantle at Metropolis on October 16.

Set to christen a brand new album on the road for the first time in over a decade, which draws inspiration from the likes of Faith No More, Deftones, Jeff Buckley and Gojira to name a mere few, the impending IV tour is set to gift unforgettable moments for both fans and The Butterfly Effect themselves, as Clint concludes , “I've forgotten what it's like to take a whole albums worth of new songs on the road, it's going to be fun to see what works out there. One thing I really love and am really excited about is hearing how the songs change, morph and evolve on tour”. And the excitement to hit the road is palpable, with Ben sharing, “This could quite possibly be the most excited I've been to hit the road in our career. With Thornill & Caligula's Horse joining us it’s going to be a great tour!”

With both new songs and old favourites guaranteed to grace the setlist for The Butterfly Effect’s impending album shows later this year, as well as the quartet’s established history for swiftly selling out their tours, definitely don’t delay grabbing tickets to witness the exhilarating next chapter for one of Australia’s most exciting and beloved bands. And as to what fans can ultimately expect from the IV tour? Kurt concludes, “These shows will be a refined energetic hard rock band playing a swag of ripper new tunes with an energy and force not witnessed on Australian shores since ACDC”.