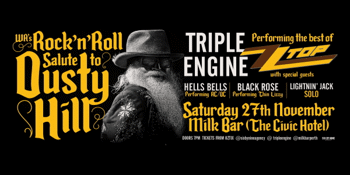 TICKETS ON SALE 9AM FRIDAY 15 OCTOBER

On SATURDAY 27 NOVEMBER, Perth power trio TRIPLE ENGINE give a ROCK'N'ROLL SALUTE to the late and great DUSTY HILL at the MILK BAR in INGLEWOOD, performing a full set of classics including La Grange, Gimme All Your Lovin, Tush, Legs, Sharp Dressed Man and many more!

Born on May 19, 1949 in Dallas, Texas, Hill grew up playing cello in high school before transitioning to bass. He started his career playing alongside his guitarist brother Rocky and future ZZ Top bandmate Frank Beard in a series of local bands such as the Warlocks, the Cellar Dwellers and American Blues. It was during this time he met future ZZ Top frontman Billy Gibbons, who was touring the same Texas circuits with his band the Moving Sidewalks.

After the brothers parted company in 1968 over musical differences, Hill and Beard moved to Houston, where they eventually united with Gibbons, who formed ZZ Top in 1969. The band’s original bassist introduced Gibbons to Beard, and Hill would join the pair for a gig in Beaumont, Texas, in February, 1970. The line-up remained the same for more than five decades. In 2020, they celebrated their 50th anniversary at a San Antonio concert.
Will Lavin | 28th July 2021 | www.nme.com

“We, along with legions of ZZ Top fans around the world, will miss your steadfast presence, your good nature and enduring commitment to providing that monumental bottom to the ‘Top. We will forever be connected to that ‘Blues Shuffle in C. You will be missed greatly, amigo.” | ZZ TOP

For all TRIPLE ENGINE info and updates visit:
www.facebook.com/tripleengine