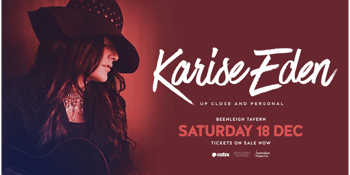 Karise Eden and her band are excited to announce they're heading to the recently renovated Beenleigh Tavern, Sat 18 Dec. Don't miss out, this is a show not to be missed!

Karise Eden’s voice can move a nation. She shot to fame at the age of 19 with a viral audition video that now has over 40 million views on YouTube which then cultivated her debut album to break sales and chart history.

Growing up on the Central Coast of NSW Australia, Karise began singing blues and rock from an early age. She started playing guitar at thirteen and also picked up the double bass.

Her debut album My Journey shot straight to #1 on the national ARIA Chart, was certified double platinum and went on to become the biggest selling album by an Australian artist in 2012. In New Zealand the album debuted at #3 and was certified gold. Karise made ARIA Chart history in the same year when she took out the top three spots on the singles chart with #1 Stay With Me Baby, #2 ‘Hallelujah’ and #3 ‘I Was Your Girl’; with her single ‘You Won’t Let Me’ at #5. Karise is the first artist to do this in Australia since The Beatles had the Top 6 to themselves back in 1964.

Karise’s second album Things I’ve Done was released in 2014, featuring lead singles ‘Dynamite’ and ‘Loneliness’. The album debuted at #5 on the ARIA Chart, achieved gold sales status and was followed up by a sold out shows around the country.

In 2018, Karise released her third album in late November starting with the first single ‘Temporary Lovers’. Her latest release showcases a more fiery side to the singer, along with her passion for blues, rock’n’roll and even a great power ballad. Eden showcased the lead album tracks with live performance videos, which have racked up 800,000+ views on youtube and garnered rave reviews from audiences around the globe.

Important Information For All Ticket Holders: All ticket holders must acknowledge that the venue is or may become subject to public health orders or advice providing that patrons are vaccinated, are medically exempt from vaccination or are able to provide evidence of their Covid-19 free status prior to entering the venue. It is a condition of the booking that patrons abide with any Covid-19 checking-in or verification procedures that the venue implements to address the public health orders or advice. For more information visit https://www.ausvenueco.com.au/safe-socialising-policy/