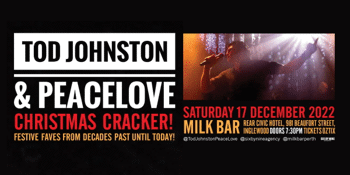 TOD JOHNSTON & PEACELOVE are excited to announce their return to their nostalgic stomping grounds of INGLEWOOD for their CHRISTMAS CRACKER! in 2022 at the MILK BAR, on SATURDAY 17 DECEMBER with special guests to be announced.

PeaceLove's live show is a feel-good party experience, that's been entertaining WA audiences across the generations, showcasing some of the best and most experienced musicians in Western Australia, creating an atmosphere of quality live entertainment to dance the night away!

TOD JOHNSTON on VOCALS
Tod was one of the founding members of the '80s band "VCapri" and still has the passion for music and the energy for getting the audience involved.

DOM PAPA on GUITAR
Dom has continued to develop his quality style and is regarded as one of the most respected players in Perth.

JOHN CALABRESE on KEYS
John completed his musical training at WAAPA then went on to continue his music in the '80s with Perth band "Ice Tiger".of timeless classics

MARK DONOHOE on BASS
Mark has enjoyed his live music for years, including live with the successful ‘80s Perth Band, " The Frames ".

BILL GERMAIN on DRUMS
Bill's musical journey started in Waroona, WA and quickly took him to the east coast where he played back in the '80s in an early version of "Dynamic Hypnotics".