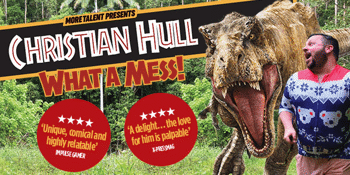 Leichhardt Hotel (Rockhampton, QLD)
Wednesday, 6 October 2021 7:00 pm
17 days away
18 Plus
Comedy
Send this event to
Christian Hull is a disaster. He is afraid of the outdoors and almost everything else. This show is about those times he has had to fend for himself and it’s almost definitely ended in near-death experiences.