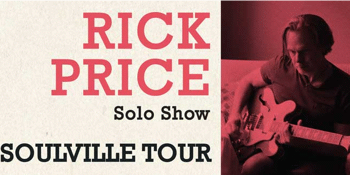 Beenleigh Tavern (Beenleigh, QLD)
Thursday, 30 June 2022 7:00 pm
Today
18 Plus
Australian Artists
Send this event to
Rick will be performing all the tracks from “Soulville” along with his classic hits on this tour, stopping into Beenleigh Tavern for a very special show this June!

On this twelve-track album Rick’s soulful renditions are a ‘tip of the hat’ to his heroes and influences in music...

These classics come from the 1960’s, Crème de la crème soul legends and include Eddie Floyd’s ‘Knock On Wood’, ‘Walk On By’ by the iconic Dionee Warwick, the immortal Aretha Franklin’s ‘Chain Of Fools’ and ‘Soulville’, Martha and the Vandellas ‘Dancing In The Streets’ and a stirring version of the time-honoured Sam Cooke’s ‘A Change is Gonna Come’ to name a few.

The one original track on “Soulville” is ‘Farewell But Not Goodbye’, a tribute to the ‘Queen of Soul‘, herself Aretha Franklin.

“On my Soulville tour, I’ll be performing tracks from my latest album release “Soulville”, a collection of songs from the 1960’s Soul Era. ‘In The Midnight Hour’, ‘Stand By Me’, ‘Sittin’ On The Dock Of The Bay’, ‘I Heard It Through The Grapevine’… just to name a few. Some shows will be with a full Band and some will be solo electric. I’ll also include some of my hits! I can’t wait to play this album live!!” – Rick Price