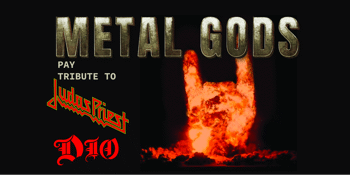 Judas Priest and DIO are arguably the seminal Godfathers of Heavy Metal.

For the first time in Australia, two former members of these bands will come together to form Metal Gods, in what will be the ultimate ode to Judas Priest and DIO.

Metal Gods will feature singer Ripper Owens – famed vocalist for Judas Priest after the departure of Rob Halford in 1992 – and Drummer, Simon Wright, who was a member of AC/DC between 1983 and 1989 before leaving the group to join Ronnie James Dio’s band.  If that’s not enough, we round this ultimate metal line-up off with a super-charged high energy electric performance by Bon But Not Forgotten, and Motorhead favourites, Motorized.

Drummer, Simon Wright joined AC/DC after the departure of Phil Rudd in 1983.  AC/DC recorded three albums with Wright in the mid-late 80’s including ‘Fly on the Wall’, ‘Who Made Who’ and ‘Blow Up Your Video’.  Wright left the group in 1989 to join Dio.

One of the most influential heavy metal groups of all time, Judas Priest emerged at the dawn of the New Wave of British Heavy Metal.  At the beginning of the '80s, Judas Priest was a top concert attraction around the world, in addition to being a best-selling recording artist having sold over 50 million albums to date. In the early '90s, Rob Halford left Judas Priest before being replaced by Ripper (also formerly a member of a Priest tribute band) in 1996.

Dio was formed in 1982 and led by vocalist Ronnie James Dio. Dio left Black Sabbath with intentions to form a new band with fellow former Black Sabbath member Vinny Appice, the band's drummer.  For a brief spell during the mid-'80s, the heavy metal quintet Dio were also one of the top U.S. concert attractions, boasting one of the most over the top stage acts of its time loaded with props and special effects (lasers, explosions, a giant dragon, etc.). To date, Dio has sold more than 20 million albums worldwide.

The Metal Gods band also features the talents of James Morley, former bassist with The Angels, and Joel McDonald, known for his work with Rose Tattoo, Various Members of Kiss, and the World Famous Frankies House Band.  The band will perform all the hits from both Judas Priest and Dio’s catalogue with Sabbath and Rainbow, as well as solo classics such as Holy Diver and Rainbow in the Dark.
Adding to this already High Voltage event will be the ultimate AC/DC tribute act, BON BUT NOT FORGOTTEN, assembling some of the world’s greatest rockers to perform the iconic hits and to pay tribute to the iconic first voice legend behind one of the world's greatest bands, AC/DC.  If it is vintage AC/DC you love then this band is the closest you will get to that authentic sound.

If you loved Motorhead and wish you could witness them live once more then Motorized are your band! Formed by three highly skilled musicians with over twenty years of stage and studio experience and a passion for all things Motorhead, Motorized are a trio that could live up to the classic Lemmy quote “if we moved in next door to you your lawn would die”.  Motorized will play a wide range of Motorheads’ extensive discography loud, proud and balls to the wall.