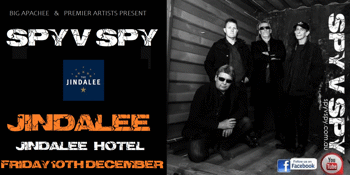 They are upfront musicians of the street, primarily they started out as the voice of the homeless squatters of early eighties Sydney but their songs spoke for everyone who felt under the thumb of the system. They told true stories of the common struggle that polite Australia didn't necessarily want to hear.

With platinum albums and gold top ten singles the SPYS gave Australia anthems of a generation, defining and cementing themselves as Oz rocks working class hero’s.

With the tragic passing of Michael Wiley one of Australia's unsung hero's of guitar Cliff Grigg original drummer and songwriter was charged with the gavel to bring the Spy’s back to their early glory. Michael had seen and heard some local musicians and embraced them as the new Spy’s to carry the music forward into the future.

Four members one goal, to redeem the Spy’s legacy and play the music with passion and pride driven by Cliff Grigg and the New Reasons was born. With a new album, the first is over 25 years filled with great Australian rock the Spy’s are back and here to stay. Don't miss out!