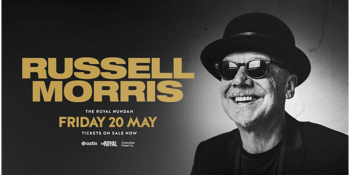 Back By Popular demand!
The Lounge (The Royal) (Nundah, QLD)
Friday, 20 May 2022 8:00 pm
2 days away
18 Plus
Australian Artists
Rock
Country
Blues
Send this event to
After selling out in 2021, the legendary, Aria Hall of Fame inductee, #1 selling artist, King of Pop and Australian Icon, Russell Morris is heading back to The Lounge in Nundah, Friday 20th May.

Constantly in demand, Russell is headed back to Nundah stopping by to play another special show in The Lounge at The Royal. Don't miss out this time!