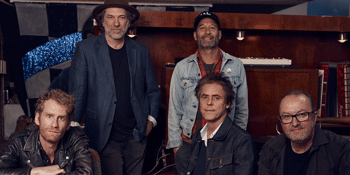 with special guests
Mansfield Hotel (Townsville, QLD)
Friday, 29 July 2022 8:00 pm
32 days away
18 Plus
Australian Artists
Alt Country
Rock
POP
Send this event to
The Whitlams' alt-country offshoot sees Tim Freedman and drummer Terepai Richmond joined by an A-Team of country musicians. The band has 55 Gold Guitars and 10 ARIAs between them, with two CMAA Producers of the Year - Rod McCormack and Matt Fell - joined by Ollie Thorpe on pedal steel.

This exciting new line up reconstructs The Whitlams' staples like 'No Aphrodisiac’, ‘Blow Up the Pokies’ and 'You Sound Like Louis Burdett', plays some new originals and pulls out a batch of surprising Americana from Neil Young to Lyle Lovett.

The Black Stump band formed in recording sessions in mid-2021, where they cut tracks that veered from campfire intimacy to rollicking country rock. They had such a good time that they decided to take the act on the road.

The latest single "The Day John Sattler Broke His Jaw" is all over Country radio. Rhythm Magazine said the track is "the best Australian song you’ve never heard. Until now. The Whitlams’ country version is a revelation.”

Don't miss them when they bring their acclaimed show to the Mansfield Hotel, Townsville - FRIDAY 29 JULY