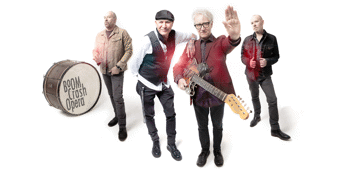 Wallaby Hotel (Mudgeeraba, QLD)
Friday, 17 September 2021 8:00 pm
46 days away
18 Plus
Australian Artists
Send this event to
Boom Crash Opera is an iconic Australian rock band, big in the mid ‘80s to the mid ‘90s and still writing and performing!

They are known for their intense stage show that blends high energy, artful intent and boisterous humour. Their live performances draw on a string of hit singles, starting with Great Wall and Hands Up In The Air (1986) through to the techno stomper Gimme (1994). Songs like Onionskin, The Best Thing and Dancing In The Storm are radio anthems that are still heard to this day.

They are fronted by Dale Ryder, known not only for his charm and charisma but for his astonishing vocal power. While members have worked in music, film, and TV, theatre, and the Arts, they have continued to tour, recently opening for Hunters and Collectors on the Red Hot Summer Tour 2020.

This followed their own sell-out tour celebrating the 30th anniversary of the release of their hit 1990 album These Here Are Crazy Times. BCO live shows are high-energy, high involvement affairs. Audiences are delighted to realize they know so BCO many songs. It’s a legacy that is still alive and kicking!