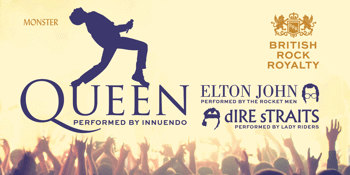 Milk Bar (Inglewood, WA)
Saturday, 30 October 2021 8:00 pm
41 days away
18 Plus
Music
Send this event to
We don the OBE’s, grab the corgis and jump in the Bentley for a night of BRITISH ROCK ROYALTY.  For the first time our massive Triple bill heads to the CIVIC HOTEL, Inglewood’s all new Milk Bar on SATURDAY 30 OCTOBER. See three of WA’s most sovereign tribute acts perform the very best of QUEEN, ELTON JOHN and DIRE STRAITS.

QUEEN performed by INNUENDO
including Bohemian Rhapsody, We Will Rock You, Radio Ga Ga, I Want To Break Free, Another One Bites The Dust, Under Pressure and more!

DIRE STRAITS performed by LADY RIDERS
including Sultans Of Swing, Walk Of Life, So Far Away, Money For Nothing, Lady Writer, Romeo & Juliette and more!

It’s like three concerts in one, (headlined by INNUENDO paying the ultimate tribute to UK rock super Giants QUEEN) and a must-see show for British music fans of the highest order.

This is an 18+ licensed event. Valid ID is reuired for entry.