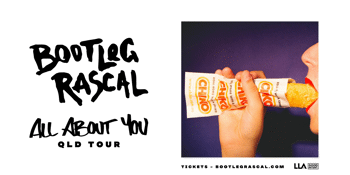 Taking cues from the likes of staple influences Gorillaz, Kid Cudi and Massive Attack, the duo combines an eclectic mix of hip hop, reggae, indie-rock, dub and electronica; all while simultaneously delivering a cohesive sound they make their own.

Since their mid-2013 inception, Bootleg Rascal have released a slew of singles, two EP’s and two albums, all of which were warmly received globally by critics and fans alike. Multiple tracks and videos have been supported by Spotify, Apple Music, MTV, Rage, NME, The Line of Best Fit, Clash Magazine, Pilerats and added to high rotation on Australia’s largest youth radio network triple j; as well as performing on the station’s esteemed ‘Like a Version’ segment.

Bootleg Rascal have continually traversed the globe playing multiple sold out headline shows in France, UK, Netherlands, Germany, New Zealand and Australia, and have performed sold out shows in the USA. They’ve also regularly appeared on major Australian festivals including Falls Festival, The Big Pineapple Festival, Lost Paradise, Hills are Alive, Festival of the Sun and Party in the Paddock.

Following on from parting ways from their previous management and label in early-2019, the group have found themselves a new team, which has brought upon a warmly received second chapter of Bootleg Rascal’s journey. “It’s unusual for a band to sound this renewed five years into their career but with a new label and management there’s a sense of rebirth that’s trickled into the music,” says Australian tastemakers The Interns.

The band have set out to work on a forthcoming record featuring new music and previously released tracks reimagined, due for release late-2021