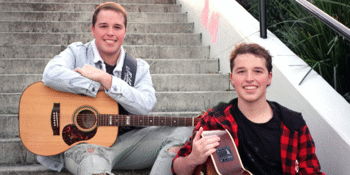 Beenleigh Tavern (Beenleigh, QLD)
Thursday, 29 September 2022 7:00 pm
49 days away
18 Plus
Country
Rock
Send this event to
Identical twins, Callum and Jackson McPartlane are each one half of the exciting new duo storming the Australian music scene, Bo’Ness. Their Everly Brothers-esque sibling harmony tangles with acoustic guitars to create a unique Rock and Country blend. At just 18 years of age these boys from the Gold Coast have already opened the national Red Hot Summer tour and melted hearts on The Voice Australia 2020.

As outspoken victims of bullying and domestic violence they’re honoured ambassadors for Kind is Cool and Bullyzero. Their 2020 debut single, ‘We Don’t Need this Town’, inspired by their dealings with domestic violence, shot to no. 10 on the iTunes Australian Country Chart and No. 6 on the AMRAP regional chart – proving people are ready to listen to what these two have to say. The last two years have been a whirlwind for Bo’Ness. Since that debut single the twins have delighted audiences on the small screen, appearing on The Voice Australia 2020, where they made it all the way to the top 20.

They’ve also been a staple on the Red Hot Summer Tour for the last two years; opening the show for some of Australia’s greatest Rock alumni, like Jimmy Barnes and Diesel. While honing their skills on the big stages the boys have been gearing up for their next run of releases. Their first new single, ‘Light up the Airwaves’ (released in Feb 2022), is an uplifting headbanger, that radiates the positivity and energy of Bo’Ness’.

Penned by none other than Chris Cheney of The Living End, the track has received over 110, 000 streams on Spotify and counting. That’s not the only Aussie music royalty the boys have recruited for their new project either. Produced by multiple Golden Guitar Award and ARIA winner Matt Fell, alongside Nashville based ex-pat, Sam Hawksley, their new work features co-writes with Lachlan Brian, Andrew Swift, Mike Carr and David Carter. Another of their upcoming tracks features music legend, Diesel. With so much success at such a young age it seems like a dream come true for Callum and Jackson. But it’s a dream built on a literal lifetime of hard work and commitment.

Their lively Country Rock has quickly captured the ears of audiences around the nation and their flawless harmony keeps you coming back for more. Yet it’s the poignant messages within their music that really makes these songwriters stand out from the crowd. 2022 will see the pair continue their tenure with Red Hot Summer as well as bringing their upbeat vibe to several other festivals and tour dates across the east coast. Bo’ness’ next single ‘Still Young’ is set for release on July 22, 2022.