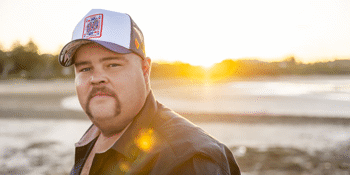 Brad Cox - What Brought You Back Tour

Brad Cox is thrilled to announce his first full band headline tour in 2 years, and the first since the release of his ARIA and Golden Guitar nominated sophomore record My Mind’s Projection.

Brad and his band will be touring in support of his brand new single “What Brought You Back’ (Out April 8) which is described by Brad as a “a classic breakup song, written in an afternoon in Nashville with the homies Phil Barton & Dave Thompson."

This tour will be Brad's biggest tour to date, hitting Albury, FRIDAY 20TH MAY and playing his biggest headline show to date. This will be the first time Brad and the band will be touring My Mind’s Projection, and with more new music on the horizon, these shows are not to be missed.

Originally from the country town of Jindabyne, Brad Cox has worked quickly to make a name for himself in the Australian country music scene. In a short time Brad went from opening slots for Brett Eldredge, Jon Pardi, Randy Houser, Adam Eckersley and Brooke McClymont to selling out his own headline shows nationwide, to becoming a regular country music festival headline act.

Brad earned wide scale recognition in 2018 with his self-titled debut album that yielded the singles, ‘Red Light,’ ‘Too Drunk to Drive’ and ‘Lake House,' as well as the anthemic crowd favorite ‘Water On The Ground’ which has notched up over 580,000 Facebook views and growing. The album earned the Jindabyne native two Golden Guitar nominations for Contemporary Album of the Year and New Talent of the Year. In 2020, Brad earned two further Golden Guitar nominations for his single ‘Rusty Strings’ (Apra Amcos Song Of The Year And Apple Music Single Of The Year). His previous release ‘Give Me Tonight’ gained widespread recognition with adds to Spotify playlists and Apple Playlists and Triple M (Metro, Regional, Country). To date, the track has amassed over 7.5 million global streams.

Brad’s sophomore album My Mind’s Projection (Sony Music Australia) was released in November 2020. The album included the hit singles ‘Give Me Tonight’, ‘Drinking Season’ and ‘Short Lived Love’. Described as a snapshot of Brad’s life over the last 3 years, the album has been Brad’s most successful to date, debuting at #1 ARIA Australian Country Album Charts, and #12 ARIA Album Chart, the album was nominated for the ARIA Award for Best Country Album, and the Golden Guitars Contemporary Country Album of the Year.

Despite the public health crisis, Brad went on to play 50 sold out solo shows across Queensland, New South Wales and Australian Capital Territory, making it one of his most successful tours to date.

In 2021 Apple Music handpicked Brad to host his very own Apple Radio show, Happy Hour Down Under with Brad Cox, making him one of only 2 Australian with such an honour.