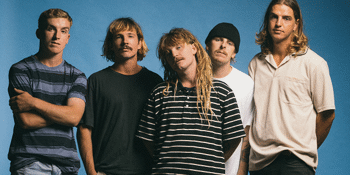 The Terrys released their debut single ‘Video Games’ in June 2020 and quickly began to build a cult following of Terrydactyls. Wasting no time releasing more music, ‘Penny’, ‘Wise Man’ and ‘Aqua Plane ft. Scraps’ followed within months. The Terrys continued to concur 2020, announcing their first ‘Tezz Fest’ which sold out across Wollongong and Sydney within days, and released ‘Pesos’, which landed in the top 20 Australian Songs of the year by the AU Review.

The Terrys started 2021 with their first studio recording with producer Jack Nigro (DMA’S, Middle Kids) in ‘Our Paradise’. With early support from Spotify in the likes of New Music Fridays and triple J Unearthed picking the band as their coveted Feature Artist, it wasn’t long until Our Paradise was taking the nation by storm and earned the band their first triple j rotation add. The Terrys went on to announce their debut interstate tour, selling out all 12 shows across East Coast cities and in regional NSW.

The Terrys love of homegrown music sees the band naturally draw inspiration from artists such as The Bungalows, Pond and Skegss with a hint of British influence from bands like Will And The People. Hooky guitars, fast and furious drums and rocking vocals will have you frothing like a dropped tinnie. With their debut EP in the works, The Terrys are going to new levels in 2021 so remember the name and go get Tezz’d.